Anne Martin is a veteran broadcaster and producer and president of World Life Video Productions. Originally from Kent, England, she came to Canada in 1965 and with a background in insurance from Lloyd’s of London, ventured into investment, public relations and theatre before starting her own personnel company. After a number of television and radio guest spots as the “expert” on employment, she decided she had found her true niche: broadcasting. 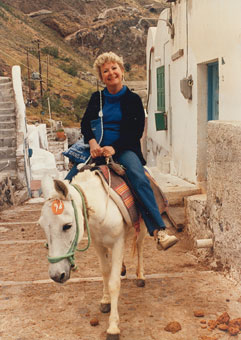 By 1979 she was hosting and producing her own daily “live” programs WORKING WORLD and POSITIVELY SPEAKING for Channel 47, Cable 4 Toronto – the multicultural television station now known as OMNI. These programs incorporated Ms. Martin’s positive approach to business and her “win-win” philosophy. MATINEE MAGAZINE, a two-hour program, was created in 1984 to expand the business format into entertainment and sports. Guests included Presidents of major corporations and VIPs to artists, authors, sports personalities and international celebrities. During this period she produced and hosted more than 1,000 hours of programming and raised over one million dollars in production funding.

In 1985 she left MTV to create WORLD LIFE VIDEO PRODUCTIONS producing a number of business-orientated programs and the award-winning PRIME TIME show that explored the issues and accomplishments of seniors. But it was IN SEARCH OF OUR HERITAGE, a PBS-style series sponsored by Mobil Oil that got Anne thinking about a pet project targeted for international distribution.

It took four long years to get ON TOP OF THE WORLD off the ground and on to the international air waves. The documentary series shot entirely on-location incorporated Ms. Martin’s love of travel as a way to promote greater cultural awareness, peace, and education through tourism. Her next project THE GREAT CANADIAN HISTORY SERIES commenced broadcast in September 1991. Produced in co-operation with VISION TV and THE NATIONAL FILM BOARD OF CANADA the series spanned the early days of the nomadic peoples through to today’s immigrants. While filming across the country she also produced ON TOP OF THE WORLD: CANADA, a one-hour special endorsed by the Canada 125 Corporation, as part of the official 125th anniversary celebrations of the nation. In a further “first”, the video was distributed as part of the celebrations in English, French, Innuktitut, and later Japanese and Spanish. In 1992 she produced a sequel, CANADA: THE TRAIN JOURNEY.

While continuing her love of “live” television, she worked with tourist boards and corporations to develop national marketing and promotional strategies. Appointed Travel Editor for the weekly publication Tandem on its launch in October 1995, she honed her journalistic skills and continued to expand her travel knowledge into Asia, Europe and North America. In 1996 she was elected President of the Travel Media Association of Canada an organization that comprises Canada’s prominent travel journalists & broadcasters along with leaders in the travel industry.

In 1999 she produced a weekly show ON TOP OF THE WORLD TOO that travelled the globe and broadcast on Prime a national tv station; and three years later she established a relationship with Reader’s Digest and PBS Television, creating two three-hour specials: RAILWAY ADVENTURES ACROSS CANADA and JOURNEYS THROUGH THE BRITISH ISLES. 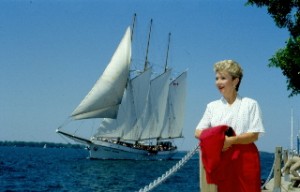 Commencing in 2004 and broadcast on PBS-TV, she researched and filmed a mini-series on 1812 AND ALL THAT… a series completed for the Bi-Centennial of the War of 1812.  In 2005 she received the Starwood Award for Outstanding Achievement for dedicated promotion of Canadian tourism to USA. And in between filming features for the 1812 series, she also produced TORONTO 175 a 90-minute special to celebrate the 175th anniversary of the incorporation of the City in 2009.

In recognition of the educational value of all these programs she has partnered with an educational consultant and distributor to prepare Teacher’s Guides and has reformatted some of her programs to meet the curriculums of schools for distribution across Canada. One of these, CANADA: THE PROVINCES AND TERRITORIES, received the 2006 AMTEC Award for Media Technology in Education in Canada.  And she received the 2010 London Best Video Award for 1812 AND ALL THAT…

Anne is also passionate about cats and has undertaken responsibility for a feral cat community in Cabbagetown, Toronto. In the past 20 years she has fostered and placed over 60 kittens, socialized and found homes for some of the adults, established a spay/neuter release program, fed literally hundreds of unwanted, abandoned and feral cats, built shelters for them during Canada’s harsh winters and obtained veterinary care. She’s always on the lookout for other cat lovers and good homes!!

Ms. Martin lives in Toronto’s Beach community with long-time companion Dick Howard who will be familiar to soccer fans for his television appearances on CBC, TSN, and sports’ networks as an on-going technical analyst for the World Cup and other major football tournaments.