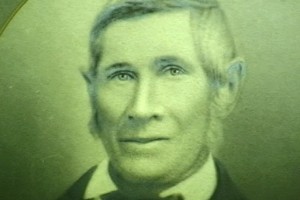 In the late 1790’s, the town of Newark (today’s Niagara-on-the-lake) was the capital of the Province of Upper Canada. During the American Revolution a significant proportion of the population of colonies loyal to the Crown had fled to the Niagara region where they were granted land in return for their loyalty to the King. Although they lost all their land and homes in the process they were still close enough to the border to be able to continue some of their past trading relations – a fact that would have significant impact on their lives in the years ahead. But for those settlers having to start all over again: imagine trying to carve a life out of the heavily wooded and swampy terrain while plagued by mosquitoes and black flies; and imagine a time when only those who could afford it would benefit from education and good medical care.

By all accounts the youngster grew up in the bush and lived on the mountain above Stoney Creek where he knew the area like the back of his hand. We don’t know much about his younger years and believe his mother may have died during his birth and so he likely ran free and did not benefit from any home schooling. A simple soul, he was able to participate in the War of 1812 as a Flanker where he proudly beat the drum: an activity he continued every night until his death in 1877. Billy was, however, credited with an important contribution in the Battle of Stoney Creek. Although only a few soldiers were killed in the battle, it was a deciding one in the War of 1812 since outnumbered British regulars and Canadian militia defeated invading Americans.

It was Billy who, with his knowledge of the bush, was given the all-important password that would enable him to get through the American lines, contact the British officers, and guide them back to Stoney Creek in the middle of the night. In 1875 Billy was one of several 1812 veterans who received an Award from the Government.

During the Bi-Centennial and the anniversary of the Battle of Stoney Creek there are a number of people who would like to see Billy get his just recognition. But Billy’s claim to fame has been questioned. It seems there were a number of ‘William’ Greens in the militia and regular army of the time and many accounts of the story vary.

Books have been written and intensive research conducted to

try to clarify the events that took place on June 5, 1813. One of the best entitled “Billy Green and Balderdash” is written by Doug Green in cooperation with the Stoney Creek Historical Society. It is an interesting and factual account that attempts to refute the questions raised by other authors. In so doing, you learn there is much more to the Billy Green story: how and why he was given the password, diaries that support the story and sometimes with misleading dates might refute it; how Billy got through the lines, why the loyalty of locals were questioned by both sides; and then there was his killing of an American sentry – an act that haunted him the rest of his life.

For lovers of real Canadian history and to obtain a copy of the 30 page booklet send a cheque or money order for $4 (which includes mailing) to the Stoney Creek Historical library, PO Box 66637, Stoney Creek, Ontario, L8G 5E6 or telephone (Canada) 905-662-4065.

To see the Billy Green video feature in our “1812 and all that …” series, click here